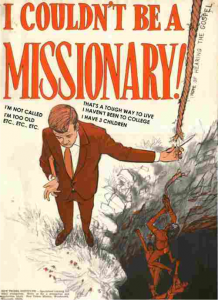 The “Missionary Mystique” is a wrong perspective of missions that often works against God’s desire for His people.   What is the missionary mystique?  The word “mystique” means a special quality or air that makes somebody or something appear mysterious (special) or elusive.  When the average Christian hears the words “missions” or “missionary” it often carries with it a mystique.  Missions is something that happens in far away and unfamiliar places by a missionary who is a special person with an unusual call.  Because the majority of Christians don’t feel that they can participate in that way they don’t continually carry the burden for missions.

Jesus didn’t see it that way.  Both before and after He rose from the dead He sends all of us on His mission.  (Impt:  Jesus never traveled more that about 100 miles from His hometown).

The main point of God’s idea of missions is that it is everyone, everywhere, all the time.  The whole earth is our mission field both where you live as well as far away places.

There are a couple of extreme errors in the way Christians think in regard to missions that can keep us from moving in God’s design.  One is what I call the “adventure mentality” while the other is “apathetic resignation.”

In the adventure mentality missions is more a desire for the exhilaration of adventure as much as obeying the will of God.  Some people are wired to simply not be bored.  The thought of going to far away places on an adventure adds spice to life.   After all Christianity shouldn’t be boring!

While Christianity isn’t boring there are certain aspects of it that require endurance.  Heb 12:1-2… let us run with endurance the race that is set before us,  (2)  fixing our eyes on Jesus, the author and perfecter of faith, who for the joy set before Him endured the cross, despising the shame, and has sat down at the right hand of the throne of  God.  Not everything in the Christian life is high energy.  That is why God prizes faithfulness.  Most of the great exploits seen in Bible have a lot of time elapse in between the verses.  Excitement seeking Christians would have a hard time in Abraham or Joseph’s story that had many years of ups and downs often with long periods of not much happening.

Excitement seeking Christians get bored with anything that speaks of mundane consistent labor.  The thought of a consistent witness, building in a local church for the ongoing testimony of God in their area is too painful.  “Surely that can’t be the will of God!”  People in this state often fall prey to the foolishness Solomon writes about in Proverbs.  Pro 17:24-25  Wisdom is in the presence of the one who has understanding, But the eyes of a fool are on the ends of the earth.  (MSG The perceptive find wisdom in their own front yard; fools look for it everywhere but right here.)  Going to your workplace on Monday isn’t as exciting as getting on an airplane to go to another country but it is just as much of a mission field!

The other mentality is apathetic resignation.   “I only live in a small town and am around the same people all the time, I could never be effective in missions.”  If left unchecked this mentality will foster carnalism that becomes comfortable doing the bare minimum.  “What’s the use I will never travel far away from home.  I must not really be called to mission.”  (It is important to remember that Jesus only traveled at the farthest point about 100 miles from His hometown).

I once heard  it said “it is better to chase a God-given dream through a minefield, than be as snug as a slug in the mud.” To hid behind the idea that you are not called to missions could be an effort to easy your conscience so you can be content being a pew-warmer.

“Many are called but few are chosen” really means many are called but few rise to the challenge.  People with apathetic resignation have a “let me first mentality” found in Luke 9:59-62.  Nothing in their Christian life has sacrifice or bearing the cross in it.  Any suffering they face isn’t as a direct result of serving God which is the idea of “our cross” that Jesus told us to take up.

Christianity and Church is a Non-Spectator Sport

We all have a call to missions and the whole world is our mission field (whether locally or beyond).  Christianity is not a spectator sport.  There are many different callings, but no one is called to be a spectator. There is a cost and a degree of involvement in being a spectator, but higher things are expected of us.

Spectators pay at the gate. They have read their subject until they’re self-declared experts (in their fantasy league). They can always tell the players on the field how they “should have done it.” They clap and cheer. They view the victory celebrations. But there’s seldom sweat on their brow. They know nothing about bruises and aching muscles. They are foreigners to the thrill of personal achievement, the exhilaration of record-breaking performances, the satisfaction of a job well done. Their greatest accomplishment is to guzzle a drink and stuff down some nachos in the midst of a cheering crowd (without a spill). They are potential champions pouring their lives away; non-achievers who love their comfort more than success.

The great preacher Charles Spurgeon said, There’s no honor in being swept along by a godless throng; no satisfaction in fleeing at the sight of a challenge; no glory in being dominated by fear or frozen by doubt. Limp-willed, lily-livered pretenders turn God’s stomach (Revelation 3:16).  We either walk through the curtain of fear or end up a broken shell of the person we could have been. To choose the soft life is to turn our back on our bleeding Savior and lose ourselves in Satanic deception. It’s those who sow in tears who reap in joy; (Psalm 126:6) those who endure who win the crown (1 Corinthians 9:24-27; James 1:12; Revelation 2:10; 3:11). Insipid, half-hearted ‘Christianity’ is sickening to God, the world, and the devil.

We need to get out of the pew and into the game.  Whether it is across the street, the office, the town, or even the ocean we need to take some steps of faith, even what seems to be small ones.

In the church world we have often been fixated in sins of commission instead of omission.  There are two types of regrets:  regrets of action and regrets of inaction.  A regret of action is “wishing I hadn’t done something”  which is a sin of commission.  A regret of inaction is, “wishing you had done something”  which is the sin in of omission.  Let’s seek God for His creativity and stirring of faith to take small steps into our everyday mission field all around us.