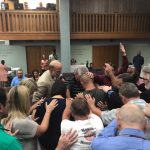 Laying on of Hands Josh Alexander

Several people from our C2C family gathered in Herington, KS, in early June for the ordination of Josh Alexander into Eldership.  It was a great presbytery of about 15 leaders from across 5 churches in the C2C family gathered to participate.   Paul speaks about a “presbytery” in the sending and setting in of Timothy at the church in Ephesus.

1 Timothy 4:14 Do not neglect the spiritual gift within you, which was bestowed on you through prophetic utterance with the laying on of hands by the presbytery.

A presbytery is made of seasoned leaders some of which hold Ephesians 4:16 giftings.  More than just leaders performing a function at an ordination ceremony, we are family.  Family is the launching pad for all that we do as C2C. The Godhead and His house are a family so the atmosphere of family should mark everything. 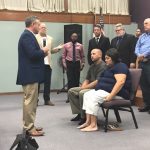 Propheti Word to Josh and Keri

Real church to church relationships mark the writings of Paul.  We see it clearly in what we call “The Relational 16s and 4s” (Romans 16:1-16,1Cor 16:10-24, Col 4:7-18, 2 Timothy 4:11-22, Phil 4:1-23). He speaks over and over again about people who traveled among the churches in a personal way.   They were not simply members of the same organization but fellow family members known and loved by all.  It was great so see so many church to church family members participating in the ordination.

Gary and Liz Schrader started and lead the work in Herington.  Josh and Keri have helped shoulder a load of leadership with them for years.   As Josh is officially ordained Gary now has an eldership team to lead the church forward.

Herington holds a unique place in North American History.  In the 1500s the Spanish explorer Coronado traveled to the Herington area looking for the cities of gold.  Father Padilla, a Franciscan Friar gave up a high position with the church to travel with Coronado.  He was known to be kind, gentle, but full of energy.  When Coronado moved on from the Herington area Padilla stayed behind to continue his missionary work among the Indians.   He was killed by Indians in that area thus becoming the first Christian martyr on North American soil.

Pray for the church family in Herington as they continue to go forward as “salt and light, a city set on a hill (Mt 5:14) in Herington, KS.