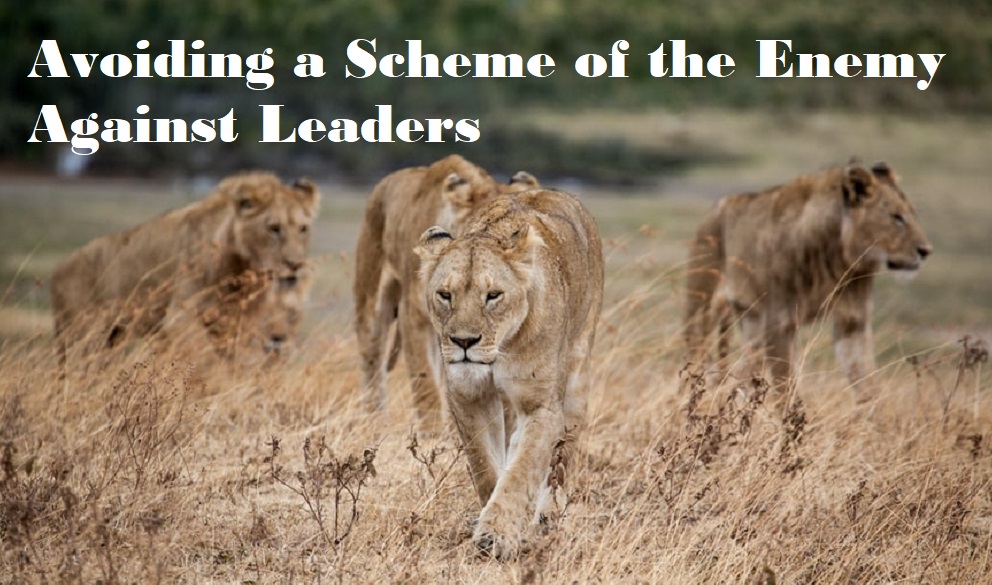 All of God’s people go through hard times that test their faith. Leaders face it even more intensely because the enemy knows what God said, “Smite the shepherd and the sheep shall scatter” (Zech 13:7, Mt 26:31, Mk 14:27).

Going after leaders is a tactic in natural warfare as well. If one army can take out leaders of another, they will usually win the battle. During the American Revolutionary War at the Battle of Saratoga, the American army used this tactic. On the eve of the battle, the patriot forces surveyed British forces. They were severely outnumbered in ammunition, muskets, men, and supplies.

The night before the battle, Daniel Morgan, commander of a group of farmers called Morgan’s rifles set a strategy, “Don’t waste your shot on those who fight for a mere sixpence a day, save your shot for the Epaulette men” (Epaulettes were ornaments worn on the shoulders of leaders with rank). By the second day of the battle, the British leader’s ranks were so decimated that they surrendered even though they still outnumbered the patriots in everything.

A Main Scheme of the Enemy Against Leaders

Paul tells us that as we engage in warfare, we are “not ignorant of the devil’s schemes” (2 Corinthians 2:11). The Bible showed one of his primary schemes against leaders when Jesus took His first steps towards His calling.

An Essential Battleground Leaders Must Avoid

Isolation is the enemy’s favorite hunting ground! He “prowls about like a roaring lion seeking someone to devour” (1 Peter 5:8). How do lions hunt? They stalk herds patiently, waiting for animals to drift away from the others, then the lions devour them.

I was once at a large game reserve in Kenya and saw this firsthand. A male and female lion approached us. We had a vehicle with an open-top, so I stood up and took pictures as they slowly prowled around us. Looking directly into their eyes was ominous. I watched them intently as they slowly moved around and kept staring at us. It amazed me to see how slow and patient they were.

Then they slowly turned their attention behind us. As the lions walked on, I looked up in the direction they were heading. I realized they were following a herd of animals. They continued their slow, patient moves towards the herd. They were waiting to catch an animal drifting away from the pack so they could quickly devour them.

This is how the enemy goes after leaders. Unfortunately, leaders are often very isolated, especially in traditional church leadership models. I remember the account of one leader writing to a friend I knew.

“I feel so lonely in the ministry; they all share their needs and problems with me but where can I turn? I’m not sure of things any more. I have been unable to sleep properly with the pressure of it all. I cannot understand it because I know God has called me, and I suppose I should not even be talking like this. It’s probably the devil trying to make me give up. At the ministers fraternal no one else seems to be going through it. I can’t very well show them what is happening, so I don’t bother to go any more.” (This is a recipe for becoming easy prey for the enemy)

God never intended for leaders to be isolated. Consider His design for leaders.

One value our family of churches is passionate about pursuing is the importance of leaders walking in accountable relationships. We use a phrase to reflect this: “EVERY PASTOR NEEDS A PASTOR.”  Every leader needs the wisdom, encouragement, and accountability of authentic relationships with spiritual moms, dads, and family mentors who walk with them. This brings God’s motivation to continue to “draw near to Him, hear His voice, and remain faithful to His call” (Hebrews 3:12-19, 10:22-28).

Let us make sure we seek God and walk in His provision of health as leaders. Remember that the enemy will always come at us, so we must keep accountable relationships real and regular.