Churches Working Together In Waverly MO 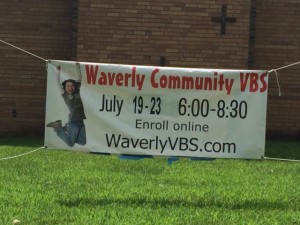 One of our goals as a family of churches is to connect with the wider body of Christ where we can to labor to bring the goodness of Christ to our communities.  In Waverly they recently completed the 4th year of churches coming together to offer a week long community Vacation Bible School for children.  Here are Jerry Curry’s reflections on the event.

Local churches realized that they were attempting to serve the same group of children in our communities with Vacation Bible Schools and decided to quit competing over the same kids and partner together to serve them.  We decided to build a bigger city wide Bible School with the various pastors and leaders.   There were 5 local churches who participated.  We all took the role of servants and decided to demonstrate to  our city that there is a greater city church that is important to our community.  We chose to come together around the fact that Jesus did die, He was buried and rose again, that He is the Savior of all of us.

This year we were able to touch 75 children and had another 50-60 helpers.  We had several children receive the Lord.  It was a fun week and at the end there was an increased sense of unity among the churches in our city.

Working together helped foster as sense of a common goal of reaching others who don’t know Christ.  We are not competing against each other but are brother and sisters in Christ.  Every churches’ success is important to the other churches and our community.

If the churches would have tried to each do it individually (as we have in the past) they would have only had about 10-20 children and the impact would have been much less.  The workload would have been heavier on each of the local churches causing a strain to fill it.  In doing it together we spread it out and at the end of the day there was a more effective synergy that what any one church could have accomplished.

People in the community saw that there were many people there who really love Jesus serving them.

One of the helpers who was too old to attend the Bible School had an amazing encounter.  While another worker was sharing a Bible story about why Jesus died God greatly touched this girl.  She had grown up in a volatile home and in the process of that night was greatly touched by the Gospel and responded openly in front of the group and received Christ.  It was a very touching moment.  We encourage churches to work together with others in projects they can come together on to be more effective in reaching our communities.