A couple of goals we have as a family of churches during the next season is extension through mission, and becoming more proficient in moving in God’s supernatural power.  Missions is not just an occasional trip to a far away place in order to work for Jesus.  Missions is everyone, everywhere, all time time.  It is across the street as well as across the ocean.  It is in the normal course of our everyday life that missional opportunities come our way.  We are seeking to release God’s life and power everyday among people who need Him. 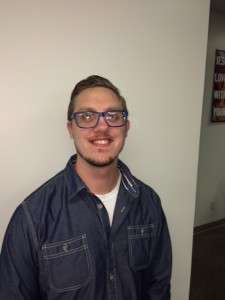 Nick Davis who is a member of “The Family Room” in Omaha NE had a recent encounter in which He saw the power of God released while on an everyday missions trip in Omaha.  Check out His story.

My wife and I were on our way to a youth event we were invited to speak at. We were driving in rush hour traffic and it was very busy. We needed to get something to eat before the event so we started driving around in an unfamiliar part of town, trying to find someplace to eat. We saw a Schlotzsky’s and decided to get some food via the drive thru. As we pulled up to the window to pay I noticed that the teenage girl that had took our order had her arm in a sling. As we were waiting for her to return to the window with our food, I turn to my wife and said I am going to pray for her arm. My wife stated what I was already thinking, that we were late. I replied “Yes, I know we are late but it will only take 10 seconds”. The girl opened the window and handed us our food. I asked her what her name was, which she told us, and then I asked her what happened to her arm. She replied that she had injured her elbow and it was in a lot of pain. I then asked her if I could pray for her arm. There were two other of her co-workers standing by her and now they started watching what was going to unfold. She replied yes, so I pointed at her arm and said a short prayer, telling her how awesome Jesus thinks she is and commanded the pain to leave. She replied ‘thank you’, and started to turn away, but I told her to check her elbow for the pain. She started looking for the pain and then she got this confused look on her face and then started exclaiming ‘what just happened, it doesn’t hurt anymore, I can’t believe this!’, and now the other co-workers looked confused and started asking her what happened. I called her back over to the window and told her that Jesus loved her, and asked her if she knew Jesus. She said she did, and I told her what Jesus said in the scriptures about healing, and that she could do the same thing. She gave us a heartfelt ‘thank you’, and you could see that she had been changed by Jesus in that moment.