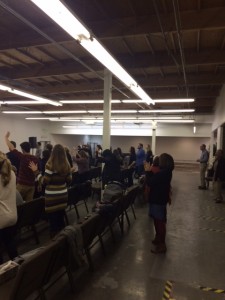 First meeting at the new building

One of the goals we have across our C2C family during the next season is “extension through mission and breakthrough.” We desire to see the five spheres expand as we strengthen the base churches and plant out from them.  Bread of Life Church in Fresno, CA (https://breadoflifechurchfresno.org/) has recently experienced major changes as they are moving towards those goals.

Their previous building arrangement was  temporary due to the land the building was on was part of the future California High Speed Rail System.  In November, while Tom was overseas with Dave Richards, Dave Oliver, and Buck Hudson, they were notified that they would have to vacate the building within the next few weeks.  What challenging timing!

As they sought God and went to work on looking at where to relocate it appeared that they may be having corporate meetings in a public school and renting office space.  They had great favor with the owner of the existing building and he approached them about another building he had purchased which was a former warehouse.  It is quite a bit bigger than their previous building but they had a sense of faith that this was the door God was opening and they moved in during the first week in December with their first Sunday meeting December 5th.

It was a big effort to move stuff, prepare the new building, and set up for services and their school.  The whole church family worked hard and they pulled it off.  In an interesting twist of God’s sovereignty, a Hispanic church that Tom and the team has become connected with happened to rent facilities in the same building.  After Bread of Life’s first Sunday meeting the other church, which begins at 12:30 pm, Tom, Doug Kreighbaum, and a few others were able to go to that service.  The pastor, whom Tom had done some Kingdom outreach work previously, opened the service for Tom and Doug to give some input.  After giving Tom room, Tom, Doug, and the team spent the next 1 1/2 hours praying over people, giving prophetic words, and laying hands on the leaders.

The next day in a meeting with the pastor he was greatly encouraged giving the strong comment “you are just like us!”  They are planning on some joint youth services and other outreaches in the future.

Missional Steps with the Forbis Family 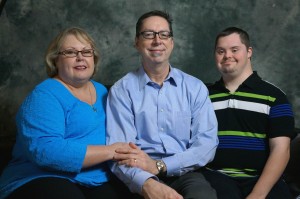 Another development that is quickly coming together by the first of the year is that Harold, Lori, and Evan Forbis, who relocated to Fresno with the Bedfords, will now be relocating to Temecula, California in a step of missional expansion. A small group was started there years ago by Lori’s parents when they came off of the mission field.  They have also had a training school of ministry there.  Over the years there has been prophetic indicators that eventually the Forbis family will relocate there to serve in the work.

While the Bedfords and Forbis family have been in Fresno, several trips have been take to Temecula to work with the church family. Lori’s parents and the church recently put the tug on Harold and Lori to come both to help care for them as well as transition into helping lead the church.  Both the local and trans-local team believe that this is in the plan of God for them and they will be sent out soon.  Dave Richards and Doug along with some others from the Spearhead team will be there in late February to help bless the transition.