He Still Heals and Raises the Dead

On Wednesday, November 2 started out like any other day for Bob Romine but a short time later everything changed.   He collapsed, his heart stopped, and he quit breathing. He was rushed to the hospital and quickly put on life support.  Medicine could not get his oxygen levels up to sustain brain function. 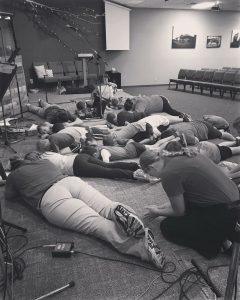 In the midst of the crisis people began to pray fervently for healing.  Students from Covenant Academy school immediately went into a 2 1/2 hour prayer meeting.  People gathered at the hospital for prayer and support for Bob’s wife Nina

The doctors and hospital chaplain were beginning to preparing Nina to face the decision to take him off of life support.  Obi Nwagwu, a nurse practitioner for a local surgeon, and an elder at Covenant Harvest Church, worked in critical care and knew the situation was not good.  He rallied people for prayer and faithfully remained by their side to help monitor the events, relay information, and give support for everyone.

“The hairs on the back of my neck stood up when he opened his eyes and moved his head.  I was witnessing a raising of the dead right before my eyes.”

Later that night after several hours of prayer, and a vigil of waiting at his bedside something miraculous happened.  He came back to life!  Those that were around his bedside when he began to open his eyes saw it as nothing short of a miraculous raising of the dead.

Denise Kreighbaum who was at his bedside said, “I had been watching his levels on his monitor and listening to what the doctors were saying.  When he opened his eyes I began to watch the monitor and saw the levels immediately change from numbers that didn’t sustain life to numbers that were back to a more normal range.  I watched it before my eyes!  God’s grace in this situation was incredible!”

Within days he was out of the hospital with no signs of any brain damage.  It was truly amazing. Listen to Bob and Obi in the video above for the full details. Here is a text from Bob as he left the hospital a few days later.

“Going home all is good, the grave clothes have taken away, the smell of death washed away, completely healed.  God still does miracles.  Thank everyone for their prayers.”